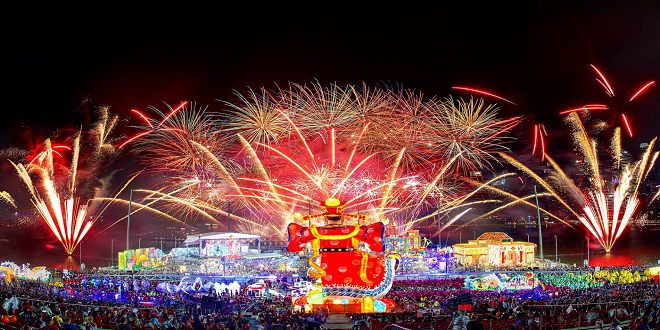 The most important event of the Chinese calendar is a breath of fresh air in Singapore, where revelers can join in the celebrations without being swallowed up by crowds, overwhelmed by long lines, and hindered by city-wide restaurant and shop closings typical of the holiday in Hong Kong.

Leading up to the event, Singapore’s Chinatown is a bustling hive of shoppers. The neighborhood’s picturesque narrow streets, lined with charming pre-war shophouses, are draped with red lanterns, twinkling lights, and banners. Hawkers sell traditional Chinese goodies, such as Mandarin orange shrubs, peach blossoms, potted bamboo stalks, bak kwa (barbecued pork), pineapple tarts, and decorations for the home. Late into the evening, visitors can watch lion dances and other music, dance and theater performances in the streets.

Hong Kong swells with visitors during this time, the majority of whom come from mainland China. The choke on services, hotel rooms, and public transportation is frustrating, and in recent years visitors have complained about unscrupulous hawkers seeking money for admission at events that are supposed to be free of charge. The party’s famous parade has also been moved from its traditional downtown Hong Kong route to Tsim Sha Tsui in nearby Kowloon. While there’s more breathing space here, many people complain that the spectacle has lost its authentic flavor.

Book early. Reserve your flights, hotel rooms, and even meals well in advance, and be prepared for delays, long lines, and surcharges everywhere you go.

Singapore’s Changi International Airport is a 25-minute drive from the city center. Taxis are the best way to travel to the city, and within the city they are a reliable option. Buses and a train system called the MRT are also easy to use.

Singapore’s dining scene is very diverse. During the festival, some restaurants close and others get fully booked, but there will always be something tempting open. Try Doc Cheng’s at the Raffles Hotel (www.raffleshotel.com) for a taste of East meets West, Singapore-style.

US$450, including food, lodging, transportation, and entrance fees.

A festival feel continues throughout the city well into the New Year with the 15-day Singapore River Hongbao, held in Esplanade Park. At this event, which is unique to Singapore, visitors are sprinkled with gold dust and confetti bearing lucky numbers, towering displays depict mythological figures from Chinese lore, and nightly performances feature acrobatics, traditional music, and martial arts. Carnival rides run along the waterfront and nightly firework displays illuminate the city skyline.

At the same time, the iconic riverside complex known as Esplanade – Theatres on the Bay hosts the Huayi Chinese Festival of the Arts, which stages visual arts performances that embody the spirit of Chinese culture. The climax of Singapore’s Chinese New Year, the Chingay Parade of Dreams is a night-time spectacle of floats, 4,000 performers in glittering costumes, and performances by guest troupes. The parade winds through historic downtown and is followed by an all-night dance party under the stars.