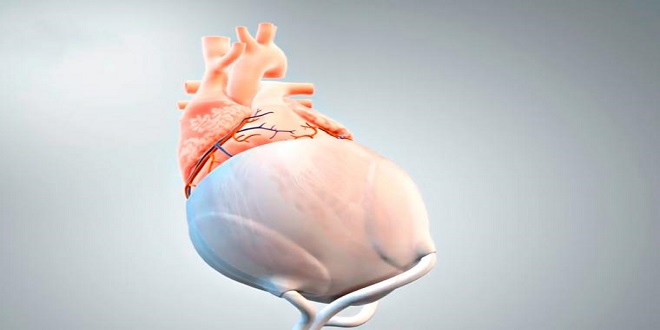 The heart is located in the thoracic cavity between the lungs. This area is called the mediastinum. The base of the cone-shaped heart is uppermost, behind the sternum, and the great vessels enter or leave here. The apex (tip) of the heart points downward and is just above the diaphragm to the left of the midline. This is why we may think of the heart as being on the left side, because the strongest beat can be heard or felt here.

The heart is enclosed in the pericardial membranes, of which there are three layers. The outermost is the fibrous pericardium, a loose-fitting sac of strong fibrous connective tissue that extends inferiorly over the diaphragm and superiorly over the bases of the large vessels that enter and leave the heart.

The walls of the four chambers of the heart are made of cardiac muscle called the myocardium. The chambers are lined with endocardium, simple squamous epithelium that also covers the valves of the heart and continues into the vessels as their lining (endothelium). The important physical characteristic of the endocardium is not its thinness, but rather its smoothness. This very smooth tissue prevents abnormal blood clotting, because clotting would be initiated by contact of blood with a rough surface.

The cardiac cycle is the sequence of events in one heartbeat. In its simplest form, the cardiac cycle is the simultaneous contraction of the two atria, followed a fraction of a second later by the simultaneous contraction of the two ventricles. Systole is another term for contraction. The term for relaxation is diastole. You are probably familiar with these terms as they apply to blood pressure readings. If we apply them to the cardiac cycle, we can say that atrial systole is followed by ventricular systole. There is, however, a significant difference between the movement of blood from the atria to the ventricles and the movement of blood from the ventricles to the arteries.

Cardiac muscle cells have the ability to contract spontaneously; that is, nerve impulses are not required to cause contraction. The heart generates its own beat, and the electrical impulses follow a very specific route throughout the myocardium. You may find it helpful you read the following. The natural pacemaker of the heart is the sinoatrial (SA) node, a specialized group of cardiac muscle cells located in the wall of the right atrium just below the opening of the superior vena cava. The SA node is considered specialized because it has the most rapid rate of contraction, that is, it depolarizes more rapidly than any other part of the myocardium (60 to 80 times per minute).

A healthy adult has a resting heart rate (pulse) of 60 to 80 beats per minute, which is the rate of depolarization of the SA node. (The SA node actually has a slightly faster rate, closer to 100 beats per minute, but is slowed by parasympathetic nerve impulses to what we consider a normal resting rate.) A rate less than 60 (except for athletes) is called bradycardia; a prolonged or consistent rate greater than 100 beats per minute is called tachycardia.