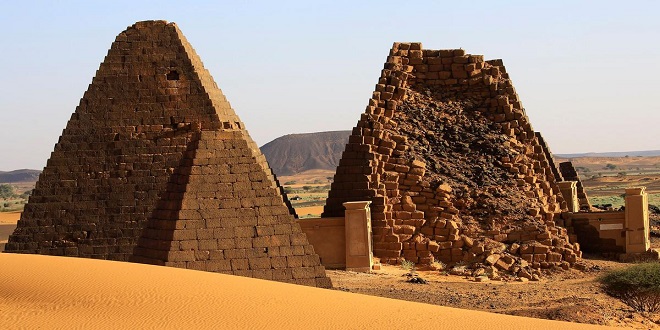 Some ideas are too good to be forgotten. When Egypt’s pyramid boom burned out in 2500 BC, its signature tomb design found its way up the Nile to northern Sudan, where it was embraced more than 2,000 years later by the Kushite Kingdom. Evidence of this architectural revival can be found at the grand royal cemeteries of Bagrawiya, better known as the pyramids of Meroe, where dozens of steep-sided, chocolate-colored pyramids litter the desert.

The Pyramids of Giza have an excellent claim to be the world’s oldest tourist sight. They have had a constant stream of visitors ever since the Greek historian Herodotus wrote about them in the 5th century BC. The awe-inspiring pyramids remain among the most significant artificial structures in existence: the Great Pyramid of Giza stands at 476 ft (145 m) high and has a base area of 63,270 sq yards (52,900 sq m).

Cairo’s urban sprawl has seen houses and fast-food chains expand to the very edge of the ancient site, where an unbroken procession of tour buses spill out their charges. The Egyptians have had thousands of years to perfect the tourist hard sell and relentlessly offer camel and donkey rides to visitors.

The Egyptian authorities plan improved fencing around the pyramids to reduce the hassle from hawkers. In the meantime, visiting early in the morning gets you away from the big groups, as will riding in by horse from the desert side of the site.

Cholula’s pyramid is so enormous and overgrown that first-time visitors regularly mistake it for a hill. Although it is not as high as the Great Pyramid of Giza, it is more extensive, measuring a staggering 191,360 sq yards (160,000 sq m) at the base. Built over 1,000 years, the monument comprises several pyramids built one over the other like Russian dolls. The giant structure was once topped with a temple dedicated to the Aztec god Quetzalcoatl, but this was later replaced with a church built by the conquistadors. In addition, visitors can relive Indiana Jones fantasies by exploring some of the tunnels that burrow into the heart of the massive structure.

The pyramids at Giza didn’t arrive fully formed  it took the ancient Egyptians around 400 years to perfect their building art. This architectural experimentation lies a short drive south of Giza at the older sites of Saqqara and Dahshur, where several pyramids, including one stepped, one bent, and one red, form the cemetery for the old royal city of Memphis.

The idea of using pyramids as mausoleums arose during the Third Dynasty of ancient Egypt, and the funerary complex at Saqqara contains five of the original structures, along with a cluster of smaller mastaba (mudbrick) tombs that provided an early model for the pyramids. Dominating the site is the Step Pyramid of Zoser the first Egyptian pyramid and the tomb of Pharaoh Zoser. The royal sarcophagus was sunk into the bedrock of the desert, then surrounded by a granite platform that was gradually expanded into a four- and then six-step pyramid according to exact calculations.

This magnificent temple, known colloquially as the Big Temple represents the architectural pinnacle of the Tamil Chola Empire, which once dominated Southern India. The vast complex, now a UNESCO World Heritage Site, is dedicated to the Hindu god Shiva and is decorated with statues and images representing the many elements of Hindu cosmology. The pyramidal temple at the building’s heart stands 13 stories high and is gloriously illustrated with carvings of the gods. The temple’s inner sanctum contains a huge stone, which worshipers walk around as part of their dedication to Shiva. This is one of the largest temples in India, and at its height, over 600 attendants would have served its needs.

The impact of ancient Egyptian culture spread far and wide. In the years after the Roman conquest of Egypt in 30 BC, scores of administrators and soldiers moved to the North African country, where they developed a taste for all things pharaonic. The Roman magistrate Caius Cestius was so impressed by the pyramids that he decided to be buried in one. His handsome tomb was faced in bright white marble and forms part of Rome’s city walls. However, Cestius proved less immortal than the pharaohs, and by the Middle Ages, locals believed the pyramid was the tomb of Remus, one of Rome’s legendary founders.

Getting There The pyramid is in south-central Rome, a stone’s throw from the Porta San Paolo train station and the Piramide metro station appropriately. When to Go Any time of year. The interior of the pyramid is open on alternate Saturdays.