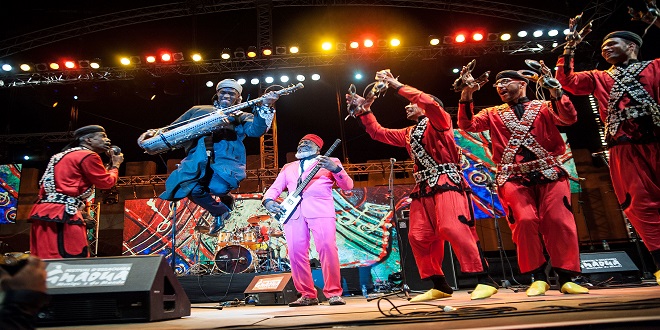 Since 1998, the music of Africa’s funkiest, most mystical religious brotherhoods has been celebrated at the Gnawa and World Music Festival. Unlike Britain’s WOMAD festival, where the range of music can seem overwhelming, this progressive event champions just one culture. Morocco’s Gnawa people are descendants of sub-Saharan slaves who celebrate spirit possession through ritual music and dance. Today, the Gnawa are feted by many for their spectacular religious performances that mix Islamic Sufism with African traditions.

Pioneered by the musician Peter Gabriel and various others back in 1982, the UK’s annual WOMAD Festival has become a byword for quality live music from all corners of the planet. World Music’s mainstream acceptance is largely due to this family-friendly festival, treasured by many as an institution on the alternative festival scene and held in July at Wiltshire’s Charlton Park

WOMAD’s wide-ranging program can mean the choice of who to see is overwhelming. The feeling that you might be missing the next big thing is palpable; the phrase “you should have been there” widespread.

Don’t just stand there watching – join in: WOMAD has an extensive program of dance and percussion workshops that get you closer to the cultures concerned. Then unwind: there are yoga sessions, cookery classes, and even a WOMAD spa. Can’t put up a tent? There are tipis, yurts, and people to do it for you.

Royal Air Maroc and various low-cost budget airlines fly into Marrakech. Transfer to Essaouira by bus takes about 3 hours; a taxi will take about 2 hours. Essaouira’s walled medina is compact enough to be explored by foot

Numerous restaurants serve great Moroccan and international cuisine, but the highlight of Essaouira’s food scene is the grilled fish and seafood straight off the boats. Try one of the many stalls in the harbor or Chez Sam, Au Fond du Port (tel. +212 24 47 62 38 or 61 15 74 85).

US$160 for accommodations, food, and travel

Essaouira’s neat size means that the nine festival stages are within easy walking distance of each other. Crowds of around 450,000 pack the town’s indoor acoustic concert venues and swarm around its large outdoor stages. Mainly Moroccan youths convulse to its late-night lila rituals – healing ceremonies in which spirits are invoked and trances entered into. The Gnawa Maalems say that music frees the soul. And nowhere is that better exemplified than in Essaouira each June