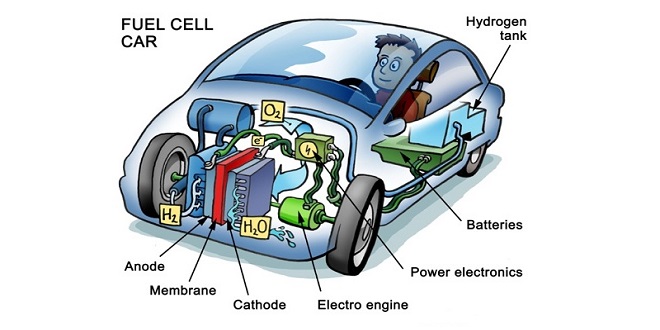 The storage of electric energy on board an automobile in batteries can be combined with the conversion of other energy forms, which can be stored at lower mass, volume, and cost. Such a conversion in a fuel cell was tested in 1839 by the British physician Sir William Robert Grove, as an “inversed electrolysis.” The electrodes of this primal hybrid between battery and fuel cell were made of platinum strips, which were treated with acid water before being introduced into hydrogen, and then into oxygen.

In a second step, Grove used sulfuric acid as an electrolyte. The hydrogen was obtained on-site from the reaction of the acid with zinc. Oxygen was taken from the airflow. This is remarkably analogous to the newest zinc-air battery concepts and to the advanced fuel cell concepts of today. As often happens in engineering, many new concepts are based on previous physical experiments.

In this context, the zinc-air battery is the functional chain link between batteries (with storage of the components) and fuel cells (with continuous feeding of the components as mass flow). A breakthrough was forced by the need for the current generation in aeronautics, resulting in a fuel cell supplied with pure hydrogen and oxygen flows over light catalyst electrodes, in dilute alkali.

Alkaline fuel cells (AFC): The electrolyte is caustic potash, having the highest efficiency of all mentioned variants. This electrolyte only functions with pure oxygen and hydrogen, therefore this type is very appropriate for use in rockets.

Direct methanol fuel cells (DMFC): These fuel cells are able to operate with pure methanol. Thus, hydrogen production on board from stored methanol can be avoided. The working temperature range is 50–120 C. Their use in automobiles has been tested and applied very successful.

Low-temperature proton exchange membrane fuel cells (PEM): A very high energy density is obtained at a working temperature range of 20–120 C. Their flexible operation and the ability to use oxygen from the air are reasons for their utilization in automobiles.

Phosphoric acid fuel cells (PAFC): The working temperature of 180–220 C is higher than for AFC and PEM, but these cells have rather limited efficiency and suffer from corrosion problems. They are mainly used in units for cogeneration of heat and power in the range of 200 kW.

Solid oxide fuel cells: The working temperature of 850–1000 C is higher than that of the other fuel cells. The solid electrolyte consists of zirconium oxide. The high efficiency when working directly with natural gas justifies their use in heat and power generators.

However, the exchanging surface must be enlarged if the power demand increases. The most frequent way of achieving this is to use a sandwich design for the fuel cell, with labyrinths and many strata. There is a remarkable analogy with a heat exchanger. Similarly, the frequent flow reversions in such channels within the fuel cells lead to turbulence, pulsations, and local cavitations.

Moreover, rapid acceleration or deceleration of the flow, corresponding to the momentary required power, also disturbs the flow. During the process within a fuel cell, a higher efficiency than in an engine is only achievable under steady conditions, at low power requirements.