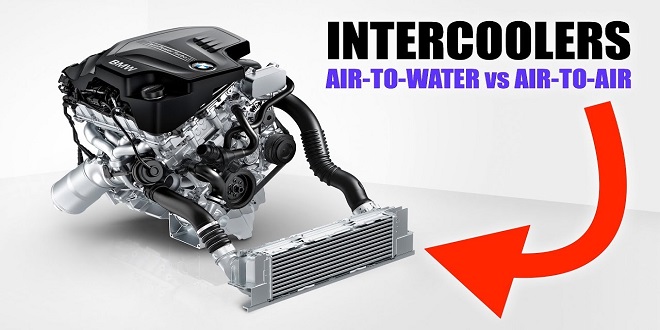 Intercooler systems are used primarily in conjunction with a forced induction system, such as a supercharger or a turbocharger. The main purpose of an intercooler is to take the turbulent outgoing air from the forced induction device and cool down the air molecules before they enter the manifold. This adds to the power of the engine by allowing more air to enter the cylinder chamber, which also allows for more fuel, and therefore a greater force of expansion exerted on the piston.

Both when used properly can be advantageous, but in general, the air-to-air is the most common and best choice for the job.

The air-to-air intercooler is the most common type of intercooler because it is the least expensive and simplest unit, as well as the most power-efficient system. It works by taking the exiting boost from either a supercharger or turbocharger and directing it into the intercooler where it flows through small tubes attached to fins and turbulators where the heat transfer takes place.

There is one major disadvantage to the air-to-air intercooler, and that is that it takes up substantially more room than the water-to-air type, which can be a huge difference in today’s small compact automobiles where space is at a premium. This is accomplished because of the heat transfer ratio between water.

Unfortunately, with the added systems needed in the water-to-air intercooler system, there is an additional power loss in the system besides the previously mentioned airflow losses, the loss from pumping the water through the system, which is a direct loss from the crankshaft of the engine.

The positioning of an intercooler is a critical part of the design of the system. If the system is not properly orientated in the automobile, the true gains will never be realized.