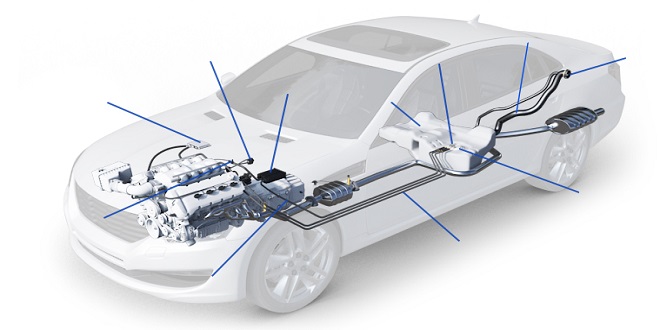 When an engine is cold starting, it must be switched from a closed to an open-loop system, which will then provide the necessary rich mixture for ignition.

During this operation, the air supplied to the second chamber in the three-way converter is diverted to the exhaust manifold, which then avoids a rapid rise in temperature and overloading in the second stage of the converter. And because of the low temperature in the cylinders, there is minimal NOx produced, so it is not necessary to worry about the first stage of the converter during the starting sequence.

The evaporative emissions is mostly composed of HC, generally from 4 sources: fuel tank venting system, carburetor venting system, permeation through plastic tanks, and the crankcase vent. To combat the fuel tank vent problems, a carbon canister is employed to catch the exiting fumes, which periodically need to be cleaned.

The permeation through the tank walls can be solved with one of several methods: sulfur trioxide treatment, fuel system lamination, fluorine treatment, or the Du Pont one-shot injection molding. All of these methods act as barriers that successfully block emissions.

From the total HC pollution, the crankcase used accounts for 25 percent of the total. To prevent this source of toxins, the crankcase fume are vented into the induction manifold through a close circuit by a positive ventilation system.

Engine cooling is an intricate part of the automotive four-stroke engine. The four-stroke engine produces large amounts of heat during the combustion process. This heat is discharged in two manners, through the exhaust gases and through heat transfer through the engine itself. Because of the potential for large heat buildups in the engine block and related components, it is important to discharge the heat in a safe manner.

Without a cooling system, the heat build-up could reach the melting points of the materials that make up the engine or reach a critical temperature for a given material where it will lose its structural integrity, such as in the cylinder chamber, in the piston, and in the valves. While it can be seen that cooling is a major part of the engine, it is also important to consider how much the engine is actually cooled.

With too little cooling, the volumetric efficiency could be reduced which would reduce the effective power of the engine. But with too much cooling, vaporization of the fuel mixture could be hindered, which again reduces the power of the engine as well as leaks fuel into the 119 oil pan. It can be seen that finding a medium in cooling needs to be reached for a properly running engine.

The cooling system must also be adaptive because of the different driving conditions a car might encounter. So there must be a way to increase and reduce the cooling for these different conditions.

It also must be taken into consideration that at different altitudes, the water in water-cooled engines will boil at different temperatures.

Today’s vehicles meet all of these requirements in order to develop and produce the most effective combination possible. There are two basic types of cooling systems for the automobile engine: Air Cooled and Liquid Cooled.

In today’s vehicles, air cooling is rarely found anymore because of the overwhelming advantages of liquid-cooled engines for street applications.